Analysts Explain Why Buying Bitcoin at $16,000 is Risky

Bitcoin bulls should brace for inflection as the cryptocurrency closes above $16,000, according to Marc Principato of Green Bridge Investing.

The executive director projected the level as an opportunity for traders to lock in some profits. He also added that they would most likely put that money back into the Bitcoin market at lower levels, warning optimists that they should not open any long positions near $16,000 as a result.

“Our plan requires 3 things to unfold before we can assume any risk,” said Mr. Principato in a note published Monday. “First, we need to reach a predetermined level (14,250 to 13,600). Second, we need price action to produce a clear setup (chart pattern, candlestick pattern, etc.). And third, we need confirmation.”

“Once we can measure risk and determine a favorable probability, we are prompted to share our idea and put on a new swing trade,” he added.

The statement followed Bitcoin’s parabolic move from $10,500 in September 2020 to [almost] $16,500 in November 2020. Many analysts agree that the prospects of ultra-low interest rates and infinite bond-buying sent the US Treasury yields lower. That, in turn, prompted investors to put money in assets like Bitcoin. 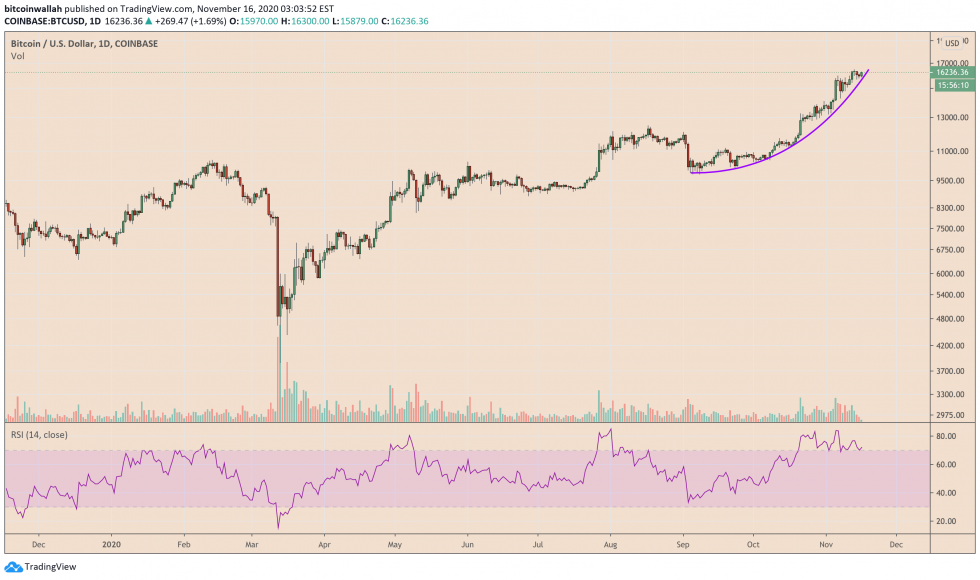 Bitcoin holding support above the parabola. Source: BTCUSD on TradingView.com

Some also believed a rising fiscal deficit led by the US government’s $2.3 trillion coronavirus stimulus aid allowed a portion of liquidity to flow into the Bitcoin ecosystem. More bullish catalysts came in the form of institutional investments and PayPal’s decision to launch Bitcoin buying and selling services on its payment platform.

Andrew Gonci, managing director at Green Bridge Investing, nevertheless noted that Bitcoin traders already assumed all the upside catalysts as they sent the price towards $16,500. Now, the cryptocurrency is trading way about its actual spot rates—an overbought asset that requires a certain degree of bearish correction.

Meanwhile, on-chain analyst Willy Woo believes that capital is entering the Bitcoin market at a record pace than exiting it. He cited Realized Price, a metric that measures the estimated average cost basis that Bitcoin investors have paid. It has logged its steepest and most “organic” upside run than the last year’s “$4K-14K move.” 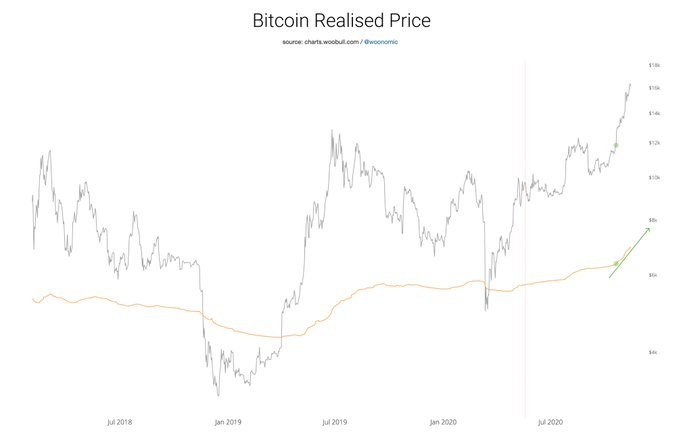 Chart of BTC’s price action over the past few years with a realized price analysis. Source: Willy Woo

5 things to watch in Bitcoin this week

India to Force Companies to Report on Cryptocurrencies