Bitcoin is now the 7th largest currency in the world

Bitcoin is the asset with the highest ROI when stacked against Gold, US Real Estate, US Stocks, Emerging currencies, and Oil, based on Willy Woo’s Bitcoin adjusted returns chart. This is a significant insight for Bitcoin traders, however, a lesser-known insight is that Bitcoin is now the 7th largest currency in the world. The current order is

The rising market capitalization trip would end if the liquidity of Bitcoin increased faster than demand. Though miner’s hourly inflow of Bitcoin to exchanges has increased by nearly 32% in the past week, based on data from Glassnode, at a market cap of about $330 billion, the price is closer to $55,000 vs. $18,000 in November ‘19. 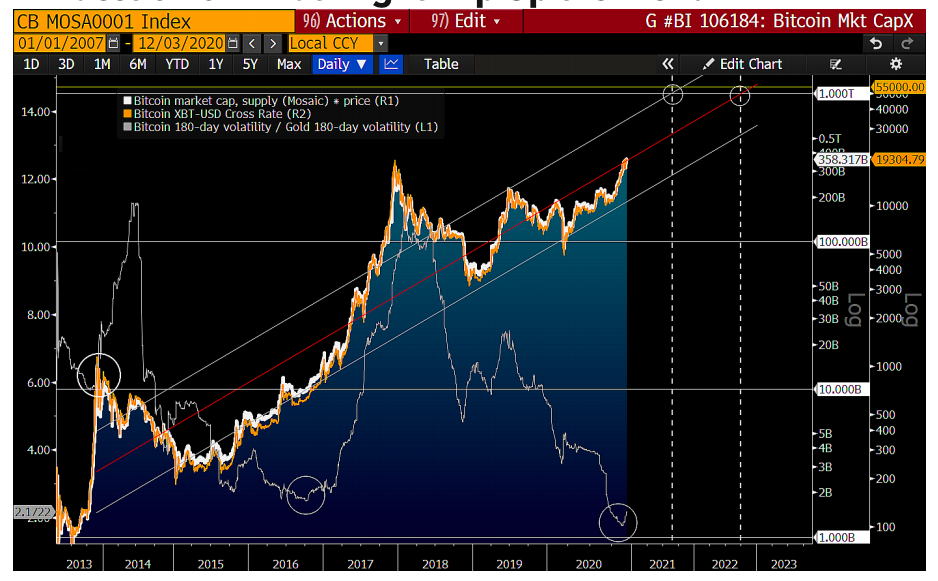 Blomberg’s chart depicts a bullish indicator for Bitcoin — 180-day volatility at about 1.9x that of gold is the lowest in our database since 2010. The asset that current ranks #7 may climb up to #4 if this bullish prediction materialized by the close of 2020. The top metrics on which this depends are demand on spot exchanges, increased unspent Bitcoins for whales’ Bitcoin wallets, and HODL waves. Institutions are consistently generating demand, however, retail traders need to steer clear of FUD and maintain the trade volume and active participation, rather than withdrawing funds from exchange wallets.

If outflow from spot exchanges like Binance and OKEx is contained, the market capitalization may possibly continue growing past $1 Trillion due to lack of other resistances, apart from regulatory uncertainty. From a bubble to the7th largest currency in the world, the climb is a difficult one, but retail has booked profits along the way and there may be more in store before the volatility settles and correction sets in for the next phase of the market cycle.