Evolving Bitcoin cycles & what to expect from the new bull run?

Bitcoin has been evolving and so have the narratives around it. Most people view it as a currency, a store of value, peer-to-peer cash, etc. However, these are the narratives that have prevailed. Other narratives included e-cash proof-of-concept, darknet currency, programmable shared database, etc.

It is clear that the narratives around bitcoin have been changing, so why care now? Because bitcoin is at an inflection point in its lifespan; an event as important as when mammals switched from quadrupedal to bipedal.

The aim of this article is to give the reader a new perspective on bitcoin cycles and better prepare users for the next bull run.

The most popular idea is that bitcoin follows a 4-year cycle which isn’t wrong per se due to the halving events. While this may have been true for the two halvings, it isn’t for the latest halving.

Each cycle consists of a boom and a bust; a bull or a bear cycle. We haven’t seen a proper bull run for about 3 years now, except until recently. Hence, as explained, bitcoin’s cycles are lengthening.

With each cycle, the ROI is also decreasing. This makes sense, as the magnitude of bitcoin’s worth has increased, the ROI should naturally decrease for it to be sustainable.

However, the price has already hit the 5-digit range in just 3 cycles. So going forward, we can expect this ROI to reduce even drastically [especially in the fifth cycle]. So, the 4th cycle is what puts bitcoin on an even global level than it already is; at least in terms of a store of value adoption.

While it might seem impossible, institutional money has just barely begun to flow into the market and we came close to surpassing the previous ATH. As mentioned in an earlier article,

“..there are 35,000 publicly-traded companies carrying a total of $5 trillion in spare cash getting negative real returns due to the pandemic. Twitter’s CashApp alone has about $10 billion in spare cash lying around. So, even if 1%-2% of this capital [$5 trillion] flows into Bitcoin, this would easily push its market cap to $2 trillion and beyond.”

So, it is important to understand how the next cycle will evolve and take steps to better prepare for the next bull run.

Let’s take a look at bitcoin cycles since its inception. 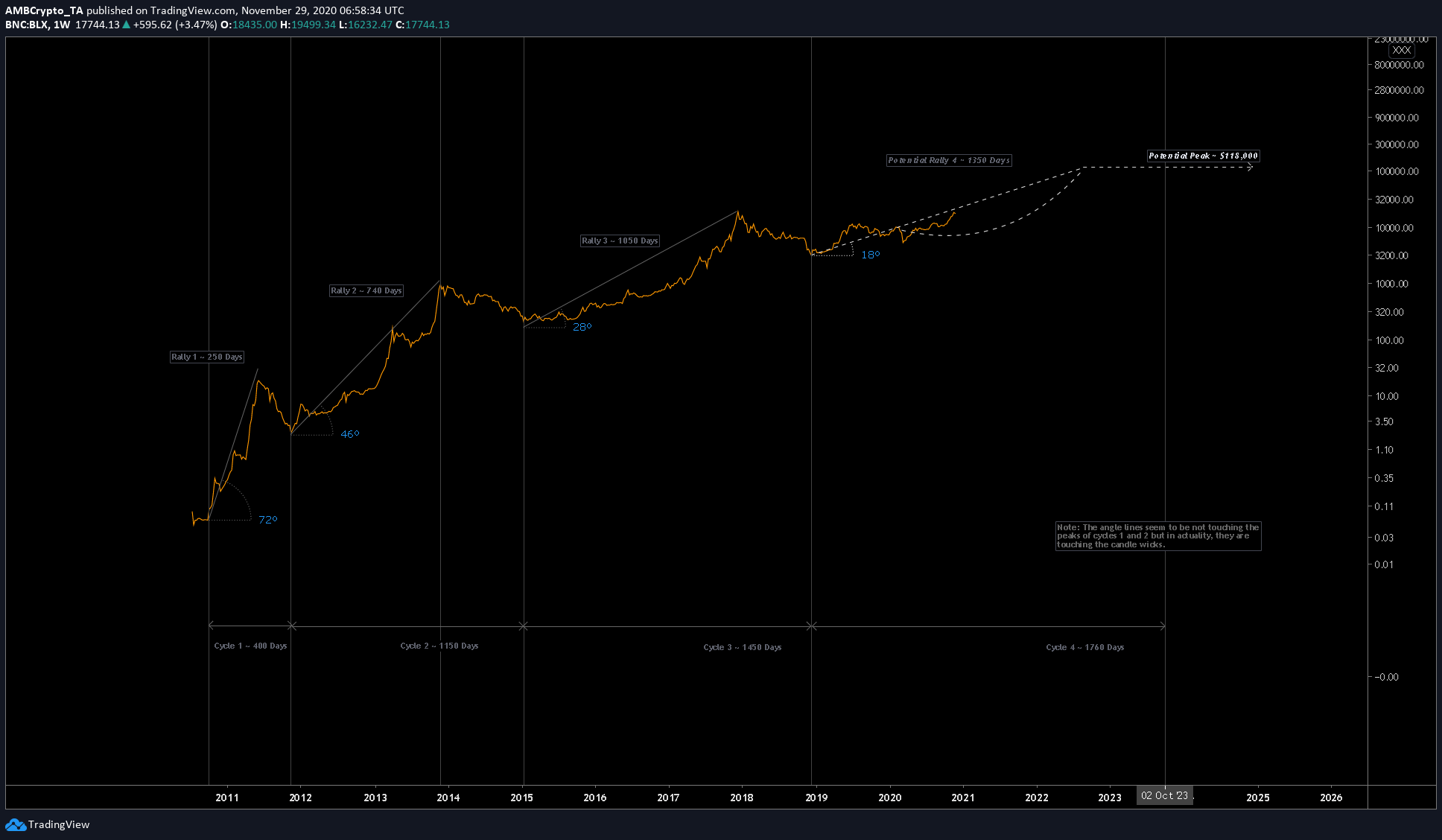 The above chart shows bitcoin has had 3 cycles so far, with the 3rd one ending in December 2018 when bitcoin bottomed at $3,122. Cycle 4’s projected length is said to be about 1760 days, considering the elapsed 760 days, there are still 1000 days until the next cycle ends.

However, if we take a closer look at the chart, we can see a small (failed) rally in 2019. This rally could have been due to

Either way, we saw something new with bitcoin. It wasn’t a bull cycle, it wasn’t a bear cycle.

To further understand the cycles, let’s break it down into pre-bull run [PBR] and bull run [BR]. For the purpose of this discussion, let’s classify the above chart into PBR and BR. 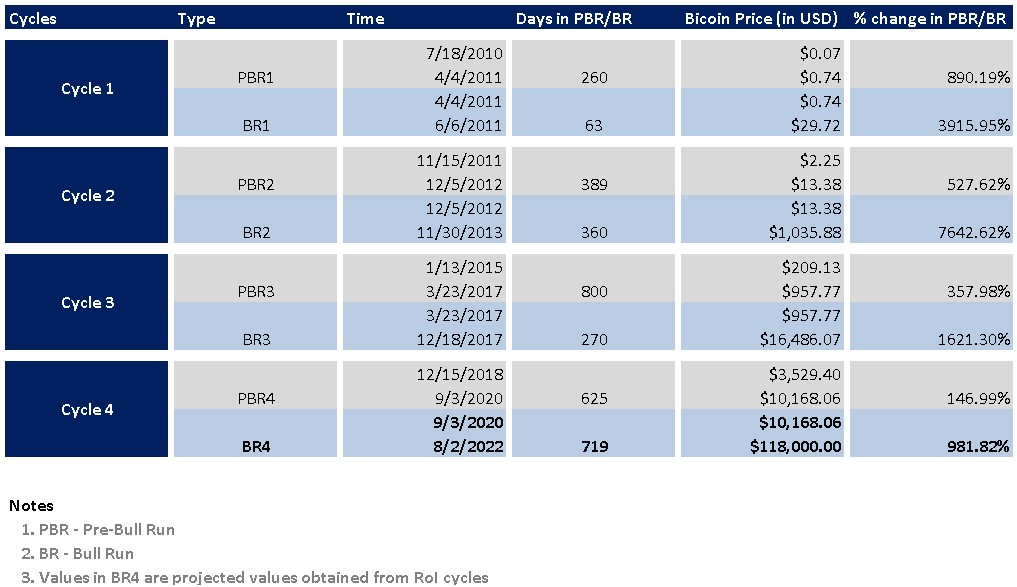 Although the bull run seems to have begun and the price of bitcoin high, considering, the peak of $118,000, it is still too early. Hence, investing in PBR phase or early BR phase is the best way to go about a bitcoin investment, especially, if one has failed to invest in a bear market.

While this is a long term scenario, taking a closer look at the cycles and the data suggests that there could be an intermediate peak to bitcoin’s new bull run. This interim peak will be much higher than its previous ATH of (~$20,000) but less than $118,000. 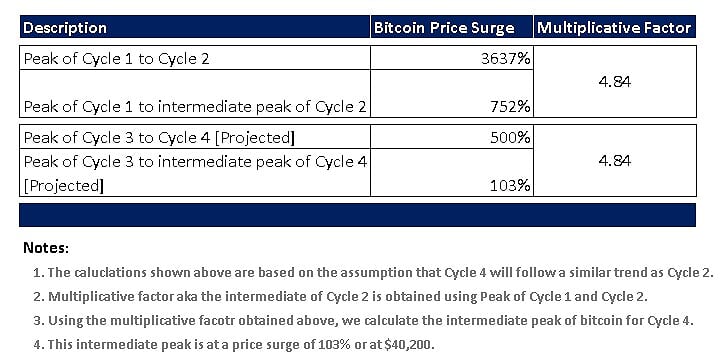 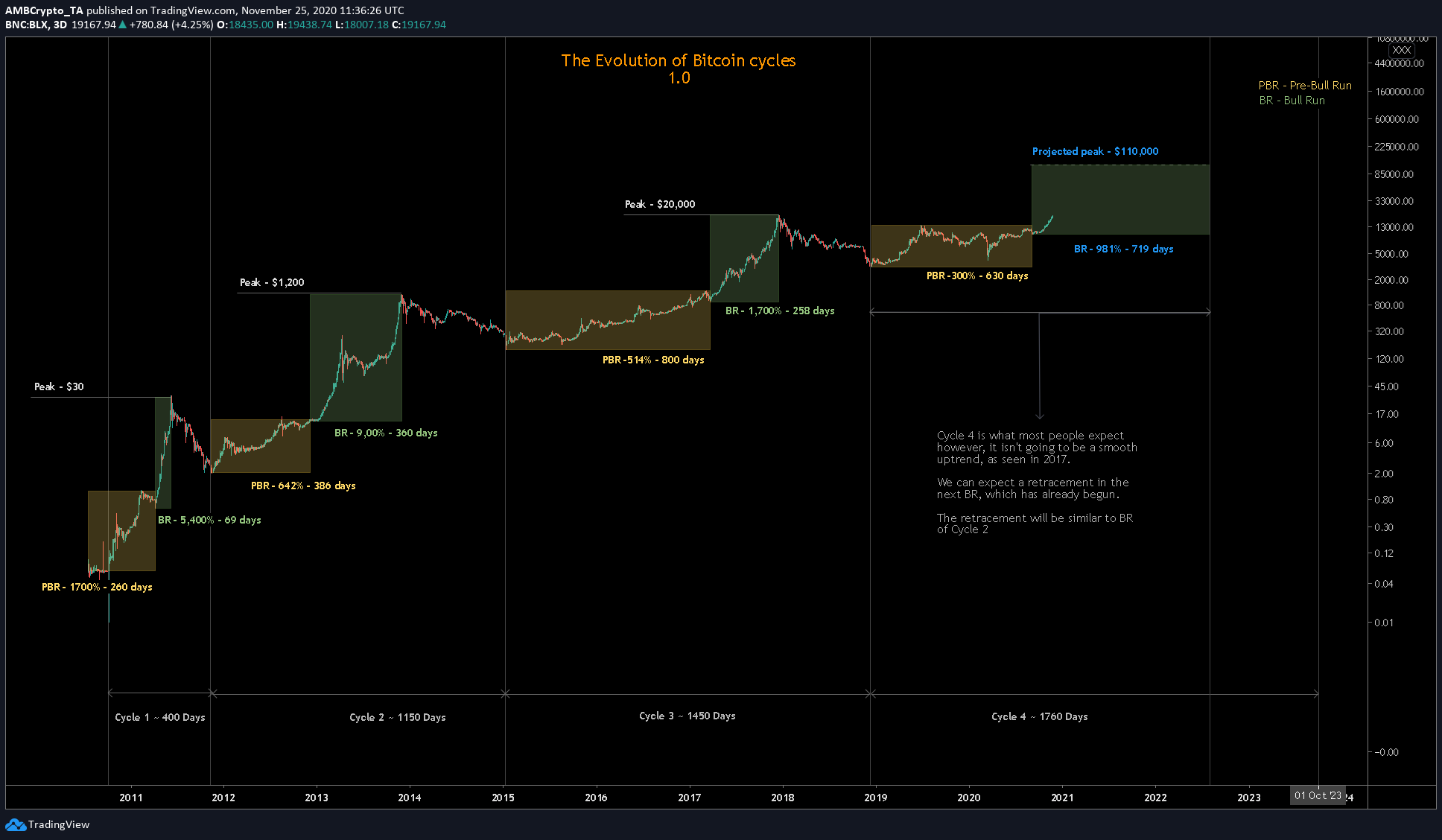 The new narrative isn’t new per se, it is quite similar to the one seen in cycle 2. Considering bitcoin’s leap to a six-digit value, we can expect bitcoin to rest along the way. Hence, extrapolating data from the 2nd cycle, we can say that the interim peak will be at $40,200.

So, a medium-term investment plan would have a target of an easy 100% surge in returns from bitcoin’s ATH.

A new narrative or rinse and repeat?

Regardless of what one might call it, bitcoin is heading to $118,000 with $40,200 as its pit stop. We can either choose to consider this as two cycles or consider it as a single cycle 4. What’s important is bitcoin’s price during the peak of the next bull run will hit $118,000 will put its market cap in the range of ~$2 trillion, which is the current valuation of Apple. 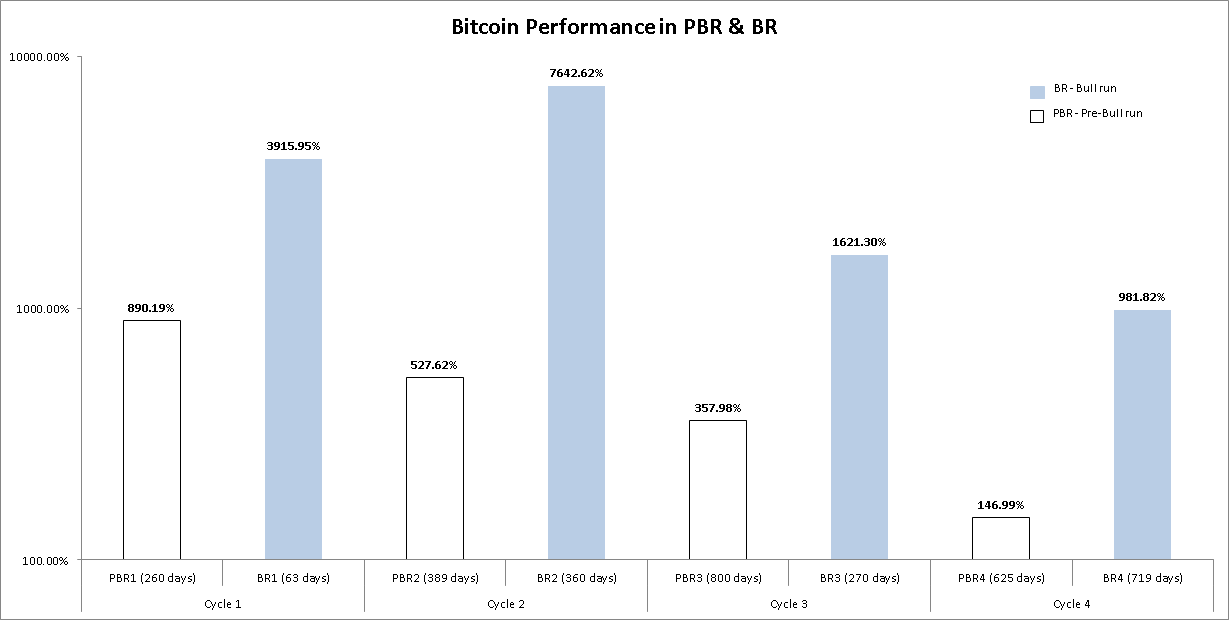 So, if you are wondering about dollar cost averaging and accumulating more bitcoin, this is the right time.

If you are also wondering how much bitcoin you need to own to stay a millionaire, check this article.

For more details on dollar-cost averaging, refer to this article.