Bitcoin (BTC) has appreciated more than 40% over the last month throughout October and the first week of November. Industry reports suggest that there has been a massive inflow of institutional money with a high preference of Bitcoin (BTC) over traditional investment vehicles like Gold ETFs.

Popular crypto analysts Willy Woo doubles down on his support for Bitcoin. In his recent tweets, Woo said that there’s “smart money” entering Bitcoin, especially from the high net individuals. He also notes that the average transaction value between investors has jumped significantly to levels never seen before. As per BitInfoCharts, the average transaction value for Bitcoin has surged above $90K.

Who has been buying this rally? It’s smart money… High Net Worth Individuals. You can see the average transaction value between investors taking a big jump upwards. OTC desks are seeing this too.

Bitcoin is still in it’s stealth phase of its bull run. pic.twitter.com/3q41pmNVP9

In his other letter, Willy Woo presents strong data points for the short term and the medium-term price movements for Bitcoin. Woo expects a short-term consolidation over the next two weeks identifying bullish patterns thereafter. For the medium term i.e. a 3-month period, overall investor activity continues to remain bullish. Citing an interesting development with NEW investors entering the market, Woo notes:

“We saw the largest impulse of coins changing hands in recent history coinciding with an influx of new users unseen since 2017; a seriously bullish setup. Since then price has rallied from $13k, topping out at $16k”.

Investment Activity On The Rise

In his recent analysis, Woo notes that the coin velocity i.e. the total Bitcoin supply changing hands has surged in recent times. This clearly indicates the fact that new investors have been buying more aggressively than earlier. Also on a 5-year chart, the spike in coin buying is the largest. 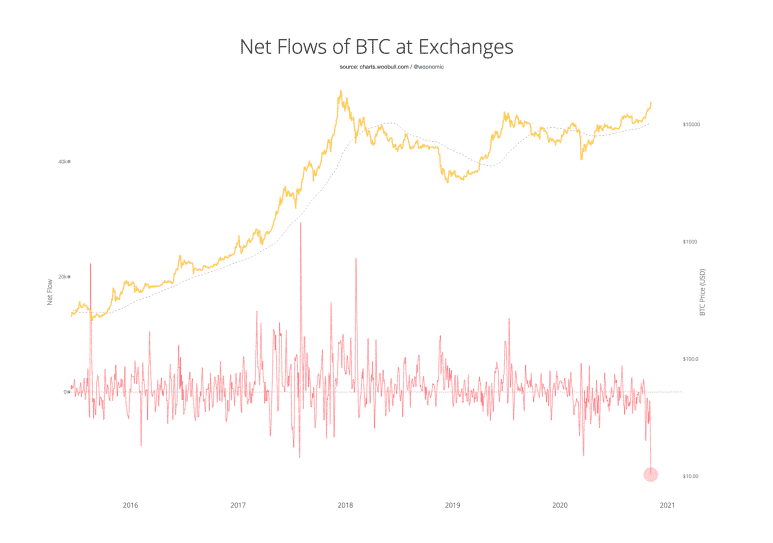 Woo also noted that the BTC price surge and the pump in coin volume were backed by net buyers on an organic scale, and not traders. He adds:

“This price move was entirely organic, powered by significant buyer demand rather than the usual trader driven action on derivative exchanges. I have not seen an organic pump at this scale in years”.

In another chart, Woo notes that the total number of new investors buying Bitcoin has reached levels last seen in January 2018.

Best of all we are not just seeing smart money flow in, it’s NEW smart money.

Orange line is the rate of new investors coming in per hour previously unseen before on the blockchain.

Another killer chart by @glassnode. pic.twitter.com/ZXk95ksx3b

Ethereum Consolidates Between $580 and $620, Reaches Vital Striking Distance above the Overhead Resistance